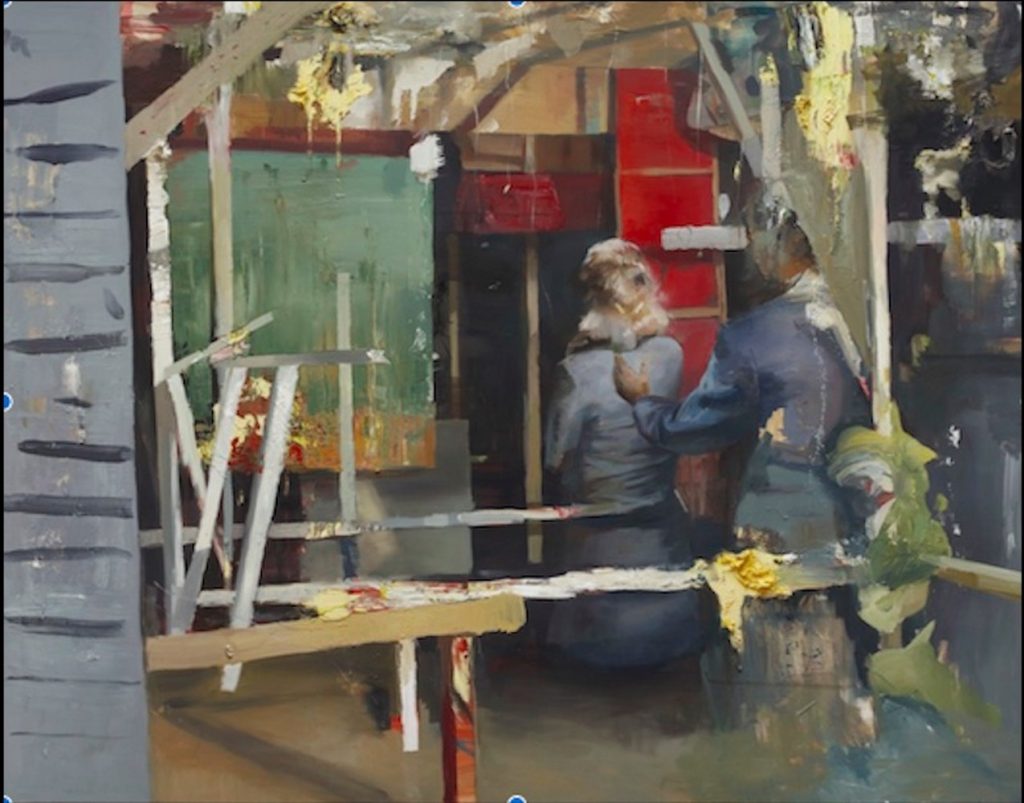 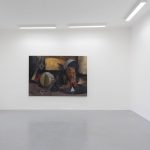 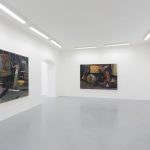 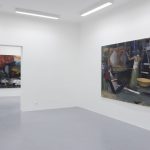 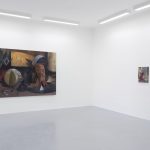 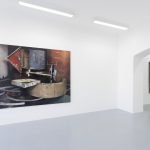 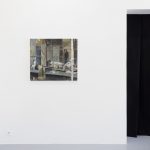 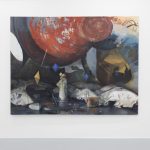 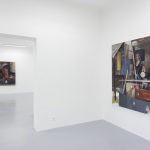 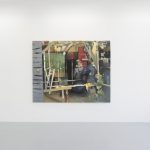 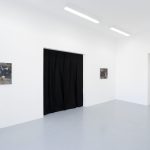 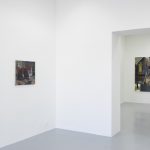 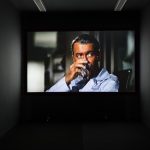 Alfred Hitchcock’s Rear Window (1954) is generally considered one of the best films ever made by “the master of suspense.” As in Rope (1948), he uses a minimal stage – one room in New York’s Greenwich Village with a view of the building’s courtyard and into the windows of the neighboring flats. It is an almost theater-like stage, extended by the curious gaze through the window frames. Jeff (James Stewart), a professional photographer of extreme situations, has recently broken his leg while photographing an accident at a car race. Confined to a wheelchair and devoured by boredom, he is driven to watching the lives of his neighbors, whom he had previously never paid much attention to. His previously fast-paced life has slowed to a seemingly endless stream of seconds. Time has begun to turn in circles and no longer flows in a line.

In his new series of paintings and the related film Broken Windows, Daniel Pitín develops his typical visuality and vocabulary in terms of both form and content. Imprisoned on the canvas, characters taken from Hitchcock’s films or from found photographs increasingly lose their ties to their original setting and begin to realize that their reality has become a complex grid of object-based interrelationships, references, and contexts. They cease to fumble about in their meticulously composed stage sets, and begin to understand their altered dimension of seeing and feeling. Jeff and Lisa, Scotty and Madeleine/Judy (Vertigo) or Lydia (The Birds) have adapted to the altered reality of Pitín’s world and begin to explore it far more confidently and to live in it naturally.

Jeff observes the courtyard and constructs the film’s narrative using his professional photographic equipment. Pitín shows only two of these instruments – binoculars and a camera. Nevertheless, the third (a slide viewer) is a perfect metaphor for Pitín’s appropriation and adaptation of Rear Window and especially for his film, and thus reflects the actual methodology for the work’s creation.

Broken Windows uses bluescreen effects to layer images and thus transfer the original faces and characters from the found material directly into the physical settings and archetypes that usually serve as models for Pitín’s canvases. Pitín relaxes his sculptural vocabulary, which previously served as merely a tool for working in a medium that is nearly as close to him as painting itself.

A slide with an image of the flowerbed in the courtyard is inserted into the viewer. The reality of the photographic image overlaps with physical reality. Jeff, Lisa (Grace Kelley) and the nurse, Stella (Thelma Ritter), compare two static images of time of the same place. One time on the slide, the other before their eyes. The two times blend together, showing their differences.

Where Hitchcock uses the slide viewer as a tool for comparing two times, Pitín adds the dimension of space. His work with Rear Window thus feels as if it has taken a lesson from augmented reality, where you can use your iPhone to change your familiar surroundings into the dreamlike world of the imagination. But Pitín’s understanding of reality is far more complex than merely adding prehistoric lizards or spaceships to your backyard. His approach works with every single aspect of Hitchcock’s shot, deconstructs it, and enriches it by presenting us with the reality of his canvases. Cardboard, paint, plywood, layer after layer, one after the other, combining and multiplying. What is more, the presence of time is intensely accentuated by the ticking rhythm. Despite its elaborate form, the connection between film and canvas is a careful commentary on Hitchcock’s simple yet precise scene with the slide viewer.

Jeff instinctively reaches for the first suitable tool for peering across the courtyard. His first glance into the privacy of a stranger’s apartment is followed by a sense of shame, and after a brief deliberation Jeff moves his wheelchair back a few centimeters into the forgiving shelter of shadows, from where he can observe without being observed. He uses the binoculars only briefly, as if his fingers weren’t sufficiently acclimated to it, and later replaces them with the most natural extension of his hands, his camera.

It would seem that we have slowly grown accustomed to living in a space of constant digital observation, and so we seek ways of regulating it. This year’s Davos was full of appeals for tighter regulation of the technological giants who have made our lives easier, but at the price of giving up our privacy. This thinking has also opened up several long-overlooked but pressing social issues. At a time of #metoo, #timesup, #oprahforprez, and the fall of Kevin Spacey or Jens Hoffmann, any gender imbalance raises numerous questions. In this atmosphere, any exploration of Alfred Hitchcock – who was known for his pathological relationship towards women, his wife, and the stars of his films – without also critically reflecting on these issues is literally a dangerous undertaking. The status of some of the greatest legends of world cinema has been shaken to its foundations – Ingmar Bergman is no longer just the director of Persona or The Seventh Seal, but also a powerful man who had affairs with most of his actresses while keeping his wife on the sidelines. Several actors who have appeared in the recent films of Woody Allen have expressed their disgust with him and have apologized for working with him. And don’t even mention Polanski. In addition, #metoo long ago caught up with the international art scene, and so we have seen museum directors and magazine editors fired on the basis of accusations of indecent behavior. So what about Alfred Hitchcock and Daniel Pitín, especially when it comes to Rear Window, where the main interest of the female protagonist – a very straightforwardly sketched portrait of a privileged young woman – is to tie Jeff down in marriage or at least in bed with his broken leg (apologies for this simplification)? She basically follows ancient gender stereotypes. There is no question that we should be aware of these societal changes and the pressures they exert on us. A focus on questions of gender, whether conscious or unconscious, is visible throughout Pitín’s work. In fact, his interest in found material from the 1950s and 1960s, which without exaggeration can be called the prenatal era of modern feminism, clearly illustrates this fact. Pitín activates his characters without their intrinsic, non-egalitarian predispositions, and carefully places them into situations that question their original context and confront them with equal obstacles. He transposes them into a world where they are forced to address different issues – including the question of privacy, which affects all of us regardless of the preservation of traditional roles.

Camera with long-focus lens / the possibility of recording an image

The man behind the camera is invisible. The complex system of lenses becomes the main actor. It enables multiple enlargement and offers a closer look at a distant place. It constructs the shot, and thus the narrative – real or imagined. No pictures are taken, and the film remains unexposed, although it could at any moment.

During the climax of Pitín’s Broken Windows, Jeff looks himself in the eyes – into his eyes as “augmented” by the camera lens – just as we stare into the cameras of our laptops and smartphones every day without having any idea how much is being recorded and how much of our private lives is still ours. Pitín thus hints at the need for introspection in every decision that we make: To what extent do we remain within the protective framework of our own context, and where do its boundaries dissolve?

All these hinted-at interpretations can be found in the brushstrokes on Pitín’s canvases, but they capture only a tiny bit of the range of possibilities that they offer. Just as it is humanly impossible to capture the onslaught of information in our everyday media reality, so too can abstract landscapes be interpreted in an infinite number of ways. And yet, if we were to go looking for a unifying factor, we would find it in the multiplex structures of power and manipulation across the political, social, and economic spectrum of the world today.

Lisa draws the curtains and says, “That’s enough for today.”

Daniel Pitín (1977, CZ) graduated from the Academy of Fine Arts in Prague, where he studied classical painting and, later, conceptual media. Pitín creates visually complex paintings with thick imagery and subtle references to canonical works of art, architecture and aesthetics from late modernism, using techniques known from the history of art all the way from baroque painting to its reconfiguration by the vocabulary of the avant-garde movements of the early 20th century. The dark scale of his palette and the ethereal figures and surreal structures that simultaneously hide and reveal their actors give his works a moodiness and hint at unspoken contents. Pitín himself describes his paintings as fragments of narratives and dreams through which he explores the “personal and collective memory of known places.” The principles behind his painterly work are also manifested in collage, video and film, with found material – family archives, internet sources, and historic film material (specifically with references to the work of Alfred Hitchcock, film noir and Czech New Wave films from the 1960s) – playing a fundamental role in this process. His interests include humanity and its creation, as well as structures and their content.