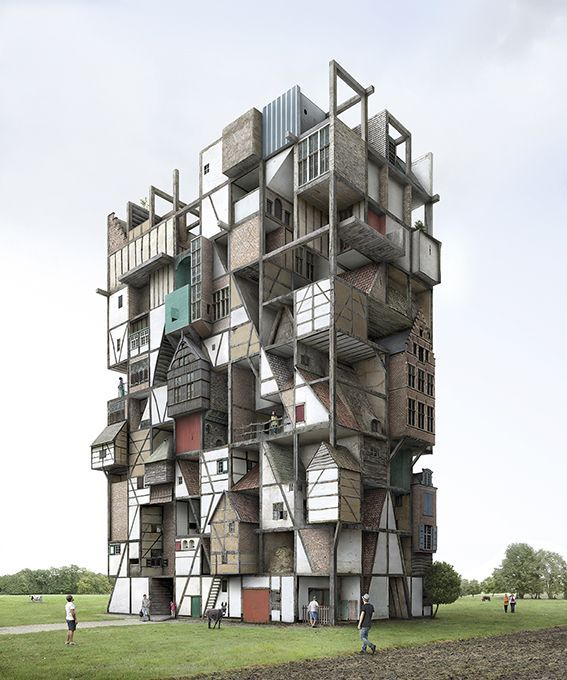 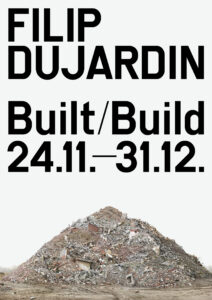 It is a great honor to be the first in the Czech Republic to present the work of Belgian artist Filip Dujardin.
Originally an art photographer specialized in photographing architecture, in 2007 Dujardin began to work on a series of images of a kind of fictional world. Using digital collage based on photographs of existing buildings in his hometown of Ghent and its surroundings, he creates surreal images of buildings convincingly inserted into the landscape no matter how impossible they would be to build in real life. In Dujardin’s photographs, which ignore the laws of physics and resist the force gravity, we thus encounter abstract sculptural formations and strange interiors, building complexes, and solitary structures. What initially seems like ordinary architecture reveals its absurdity only once we notice incongruous details.
Filip Dujardin was born in 1971 and studied photography and art history (with a specialization on architecture) at the Royal Academy of Fine Arts in Ghent, from which he graduated in 1995. He has held countless exhibitions throughout the world, and his work can be found in numerous collections at home and abroad.
In his work, Dujardin explores architecture as a form of sculpture in time and space. He takes a remarkable approach to working with architecture’s typical typologies and archetypes and is capable of transforming the ordinary into the exceptional through just minor alterations. These activities can also be seen as a certain critique of architectural production and as a vision of his fantasy world, in which he reflects on the emotions that buildings are capable of evoking in the public.
Dujardin says that when creating these images his limit is the fine line between reality and the unrealness of how far he can go, without slipping into science fiction. His path is thus the path of the unreal.
In his exploration of the essence of architecture, Dujardin gradually began to take an interest in how to translate his two-dimensional ideas into three-dimensional installations. To this end, he has exchanged pixels for bricks and, starting with an image of the virtual world of unlimited possibilities, has begun to explore the uncompromising parameters of reality, with architecture as a sculptural form in time and space.
Where his photographic collages touch on specific locations, his installations seek to be universal. Using bricks and mortar and sometimes objects made of concrete, he creates architectural structures in space, thus pulling us into a poetic environment infused with questions of what is or what could be. He strips architectural archetypes of their function and identity and places them into new interrelationships. Dujardin sees architecture as a buffer between two places requiring some form of activity – for instance, walking through or underneath something in order to renew contact between people and place. The architectural elements themselves exist in conflict with one another.
The art of Filip Dujardin moves from fiction to reality and from reality back to fiction. It asks questions such as: What is architecture? What is the image? What is the depiction of architecture, and how is architecture perceived by a specific medium?
The concept behind the exhibition in České Budějovice, BUILT / BUILD, represents a certain shift. Dujardin focuses not so much on Belgium’s architectural culture, but on the universal process of construction, architectural typology in general, and buildings as the products of accumulated historical legacy. He invites us into a place consisting not just of a selection of photographs but also a sculptural, spatial intervention that forms a kind of three-dimensional translation of the themes he explores in his collages.