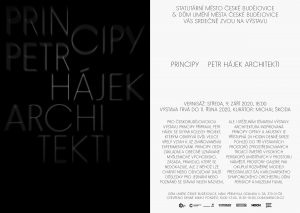 The architect Petr Hájek, who is presenting his work at the České Budějovice House of Art in late summer and early fall, is a leading representative of the domestic architecture scene. He is known as one of a few tireless “experimenters” who are constantly pushing the limits of architecture while also displaying a clear sense for the context of each particular place.

Hájek studied in Prague, and holds degrees from Czech Technical University’s Faculty of Architecture and the Academy of Fine Arts’ School of Architecture. In 1998, he joined with Tomáš Hradečný and Jan Šépka to found HŠH Architekti, and in 2009 he established his own architecture firm, Petr Hájek ARCHITEKTI. He has taught at the Faculty of Architecture since 2004, where he was named associated professor in 2010 and professor in 2017. He also runs the Virtual Studio at Bratislava’s Academy of Fine Arts and Design, where he heads the Department of Architecture. He is the founder and president of the board of the Art-Now endowment for the support of art and talent and the founder of the Laboratory of Experimental Architecture (LEA). Hájek inspired Miloš Urban to write the novel Urbo Kune (2015), which is set in a utopian city designed by the students of Hájek’s courses in Prague and Bratislava. His ever-growing portfolio includes the redesign of Olomouc’s Upper Square (Horní náměstí), St. George’s Square (Jiřské náměstí) at Prague Castle, the Archdiocesan Museum in Olomouc, and various buildings on Litomyšl’s Castle Hill (the carriage house, stables, riding hall, etc.). More recent projects include the renovation of a water tower with a periscope in Prague 7, an addition to the DOX Centre for Contemporary Art, the rooftop terraces of the Lucerna Palace, and the KCEV education center for the Krkonoše National Park.

Hájek is currently working on several projects, including the renovation of the Oko Cinema in Prague, a Cable Car Museum in Pec pod Sněžkou, a visitor center for the Stachelberg fortifications (in collaboration with Tomáš Hradečný and Benedikt Markel), the “Eternal Hunting Grounds” animal crematorium, a new symphony hall inside the Imperial Baths in Karlovy Vary, a new building for the Secondary School of Industrial Art and Ceramics in Karlovy Vary, the renovation of the historic Invalidovna building in Prague, and numerous private homes. He has exhibited his works on multiple occasions, including at the Czech and Slovak pavilion during the 2016 Venice Architecture Biennale. Another exhibition worth mentioning is the remarkable Anastomosis project, which he organized with his students at DOX. The latter project won a ČVUT Rector’s Award for the practical application of research. Hájek has earned numerous other awards for his work as well: Grand Prix of the Community of Architects, Freiraum No. 2, Bauwelt-Preis, Construction Project of the Year, Award of the Club for Old Prague, the R. Eitelberger Award, the Piranesi Prize (honorable mention), and the International Prize for Sustainable Architecture (honorable mention). He is also a four-time Czech nominee for the Mies van der Rohe Award. In 2018, he was named Architect of the Year for his outstanding contribution to architecture over the previous five years.

For Principles, his exhibition in České Budějovice, Hájek and his colleagues have put together a project showing his close relationship to experimentation.

Principles (meaning fundamental, generally recognized conceptual starting points, rules that are not proven but from which we can extrapolate other consequences for action and knowledge) are not just the exhibition’s title; they are also its main subject.

The exhibited examples of architecture inspired by the principles of optics and acoustics are accessible twenty-four hours a day thanks to three seven-meter tall periscopes on the main square in front of the gallery, through which one can peer into the three exhibition spaces. The gallery spaces are occupied by large-scale models of the Karlovy Vary Symphony Hall, the Periscope House, and the Museum of Film.

Of these buildings, Hájek says:

Into the historic building of the Imperial Baths, I have placed a performance hall ‘transformer.’ The hall is essentially a tool possessing several functions. With the help of hydraulically controlled components, it is capable of transforming in shape and thus altering its spatial layout and acoustic qualities.

The buildings offers unhindered views of the landscape even though it is shielded by a row of trees and a private parking area. The view over these barriers is made possible by applying the principle of the periscope. All the spaces for a four-person family are placed inside a periscope tube the size of a home. The primary mirror is fixed, while the lower mirror can be moved onto any of the building’s floors using a hand-operated mechanism.

The design involves the transcription of a two-dimensional image from a sound camera onto the building’s volume. The audio track is an expressed wish and can be ‘played back’ on the basis of the building’s ground plan. In this way, the message is permanently inscribed into the building’s architecture.”